Palestine: There is a solid geopolitical reason for Palestine’s centrality in world politics and wars. This is the result of Britain’s conflicting agreements with various persons of interest in WWI, and using the territory it won from the Ottomans to pay off those agreements.

The 1916 Sykes-Picot Agreement (1916) divided the Middle East into British and French spheres of influence as spoils of war. This is, after all, standard practice to reimburse the costs of waging war, as well as a major impetus for waging war, and gave the winners total control of captured territory and its inhabitants. Whether or not they were labeled with the old-fashioned term “slave,” they nonetheless existed to serve the purposes of the conquerors. 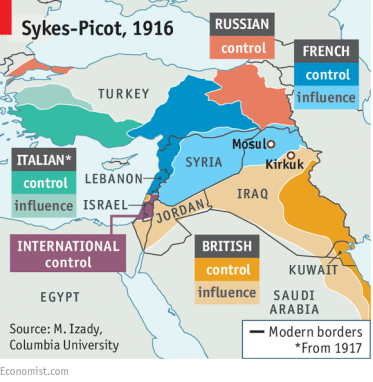 The 1916-1918 Husayn-McMahon Correspondence with the King of Hijaz in the Arabian Peninsula agreed to grant independence to him / his kingdom after the war in payment as mercenaries for launching the Arab Revolt as allies against the Turks.

Acting on behalf of the British Government, Sir Henry McMahon promised Sherif Husayn (Hussein) of Mecca, Arab control over the whole of areas to be liberated from Turkey, except an area to the West of Syria defined as follows:

The 1917 Balfour Declaration in which the British government promised the politically active world Zionists who were primarily in Russia and America, a “national home” in Palestine in exchange for activism in engaging their nations as England’s allies in WWI. Recall that at this time Russia was embroiled in a massive civil war and America was isolationist.

As part of the negotiations to end The Great Arab Revolt of 1916, which opposed British permission of a massive influx of Jews into their land, the British decreed that Custodianship of Jerusalem’s Islamic and Christian Holy Sites, passed on to the Hashemite family under H.M. Sharif Hussein bin Ali, the leader of the revolt, would remain. It remains until this day [2020).

END_OF_DOCUMENT_TOKEN_TO_BE_REPLACED

“Then shall they deliver you up to be afflicted, and shall kill you: and ye shall be hated of all nations for my name’s sake.”

In our ethnocentricity we automatically assume that “my name” is “Christian”. But if we stay consistent with our study, at the time that this was being spoken, the name that was raising such ire was a Jewish name – “Yeshua”, YHVH’s Savior.

Remember from previous posts that name = way. The noun derives from the verb, and is only true when action backs up the claim. The name is a message of salvation from, no, not other people’s oppression, but from ones’ own…sin?! How insulting! Of course they were hated everywhere they declared this hated “good news / gospel”.

END_OF_DOCUMENT_TOKEN_TO_BE_REPLACED 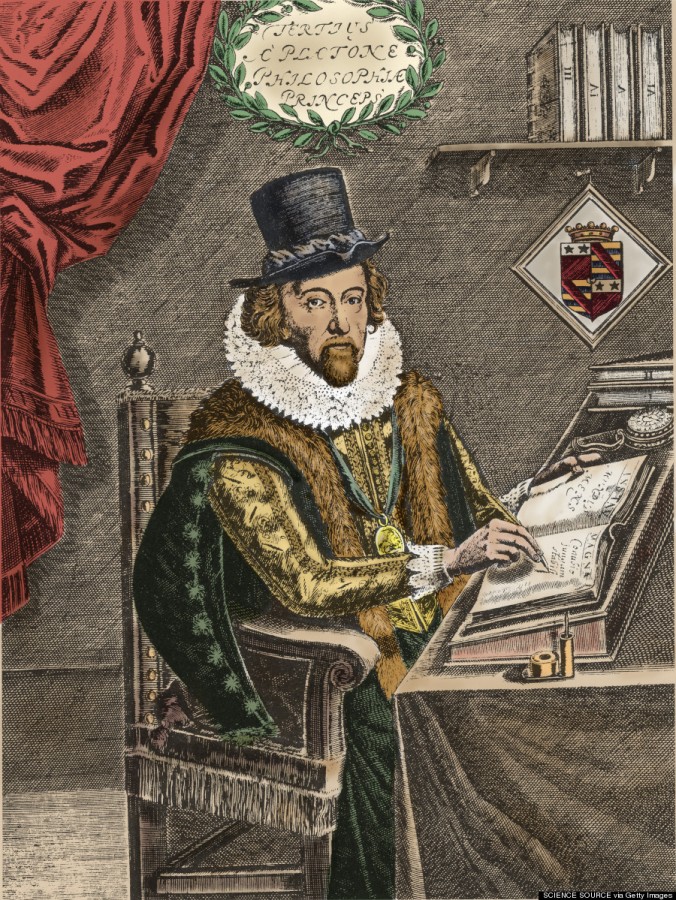 “Oh that I were made judge in the land, that every man which hath any suit or cause might come unto me…And it was so, that when any man came nigh to him to do him obeisance, he put forth his hand, and took him, and kissed him. And on this manner did Absalom to all Israel that came to the king for judgment: so Absalom stole the hearts of the men of Israel.” (II Samuel 15:4-6)

There are two approaches to counseling – whether legal, psychological or spiritual.

As a psychiatric provider I have lost clients when I insist on dealing with the facts of the matter, such as the evidence of substance abuse rather than accepting their diagnosis of anxiety, ADHD, etc. and providing requested prescriptions for controlled substances. Actually I’ve lost a couple of jobs, because an upset client carries a lot of weight with a practice manager who is only interested in profits from repeat customers.

END_OF_DOCUMENT_TOKEN_TO_BE_REPLACED

Problem: Corruption of big business and the right; labor reforms; civil rights and women’s rights movements; belief in equality of condition,i.e. that equality is to be achieved primarily by government programs aimed at raising wages and transferring income from rich to poor through income taxes and finance welfare programs; rise in belief that poverty is not a personal failure but a societal failure; expansion of secondary and higher education; attack on religious and racial barriers to equal opportunity leading to later attacks on gender-based assumptions of behavior and discrimination based on sexual orientation.

Reaction: The “mainline” Protestant churches weakened sharply in both membership and influence while the most conservative religious denominations (such as the Southern Baptists and Missouri Synod Lutherans) grew rapidly in numbers, spread across the United States…and became politically powerful. Other evangelical and fundamentalist denominations also expanded rapidly…and the more conservative churches saw themselves battling secularism in terms of issues such as LGBT rights, abortion, and creationism.

Solution: Becoming more “relevant” in society by appealing to the self-indulgence of the Me Generation and eliminating requirements for holy living. This has happened 1) corporately by becoming a political action committee for White Anglo Saxon Protestants, and worse yet, 2) individually by expanding the emphasis on a personal relationship with Jesus to the detriment of doctrine.

END_OF_DOCUMENT_TOKEN_TO_BE_REPLACED

1875 – The Theosophical Society was formed in New York City by Helena Blavatsky, Henry Steel Olcott, William Quan Judge and others. “Associating it closely with the esoteric doctrines of Hermeticism and Neoplatonism, Blavatsky described Theosophy as “the synthesis of science, religion and philosophy”, proclaiming that it was reviving an “Ancient Wisdom” which underlay all the world’s religions.”

Early 1900’s – Thelema was founded by Aleister Crowley.  Three statements in particular distill the practice and ethics of Thelema:

Thelema describes what is termed “the Æon of Horus” (the “Crowned and Conquering Child”)—as distinguished from an earlier “Æon of Isis” (mother-goddess idea) and “Æon of Osiris” (typified by bronze-age redeemer-based, divine-intermediary, or slain/flayed-god archetype religions such as Christianity, Mithraism, Zoroastrianism, Mandaeism, Odin, Osiris, Attis, Adonis, etc.). Many adherents (also known as “Thelemites”) emphasize the practice of Magick (glossed generally as the “Science and Art of causing Change to occur in conformity with Will”).

END_OF_DOCUMENT_TOKEN_TO_BE_REPLACED 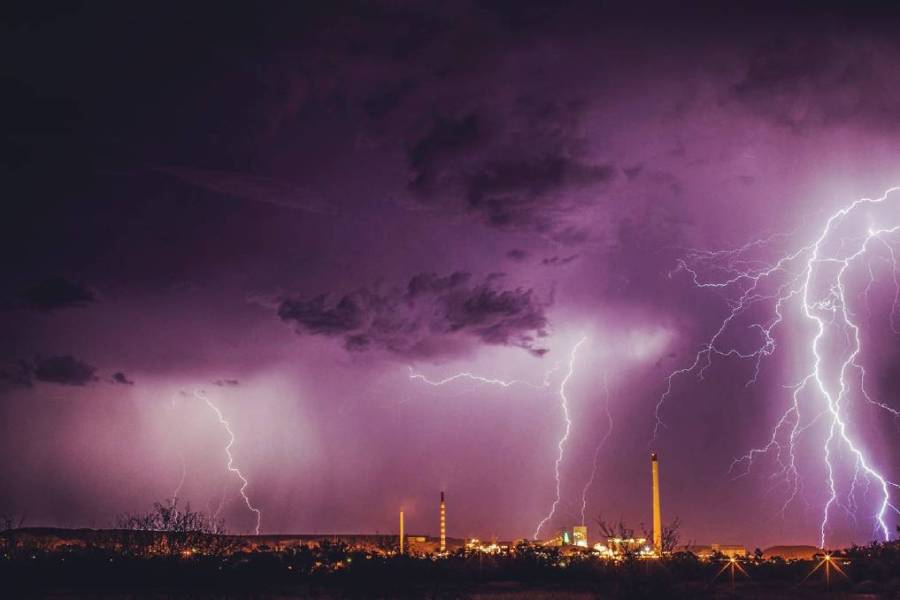 “Immediately after the tribulation of those days

And then shall appear the sign of the Son of man in heaven:

“Behold, he cometh with clouds; and every eye shall see him, and they also which pierced him: and all kindreds of the earth shall wail because of him. Even so [Despite this fact], Amen / this is the truth.” (Revelation 1:7)

END_OF_DOCUMENT_TOKEN_TO_BE_REPLACED

“arms shall stand on his part,

While the abomination of desolation is commonly conceived as a statue, no doubt because it is reported to “be set up” by Daniel and “stand” by YHVH’s Savior, this grammatical interpretation is only to be expected when knowledge of abstract spirituality is lost to society.

The more comprehensive and higher abstract meaning is “To raise in authority or power;  invest  with  power:  They set the general up as a dictator.”

“O thou king, the most high God gave Nebuchadnezzar thy father a kingdom, and majesty, and glory, and honour…

The specific abomination that maketh desolate described in Daniel’s prophecy and referenced by Jesus Christ reaches the highest levels of human collaboration with the gods of this world.

It is the political alliance of the Jewish leadership with any ungodly military power in the delusion that this nation will protect them from their enemies.

END_OF_DOCUMENT_TOKEN_TO_BE_REPLACED

We understand that when God speaks, he causes something to materialize or some action to take place.

We can therefore understand that the function of the seals on the book held by the Lamb in Heaven is to prevent God’s word from being spoken into action.

END_OF_DOCUMENT_TOKEN_TO_BE_REPLACED

The Four Horsemen of the Apocalypse

The four horses and their riders described in Revelation 6 are not unique to the end times.

“These are the four spirits of the heavens, which go forth from standing before the LORD of all the earth.” (Zechariah 6:5)

Their function is to set up such chaos and desperation that even hard-core anarchists are ready for a strong leader.

END_OF_DOCUMENT_TOKEN_TO_BE_REPLACED 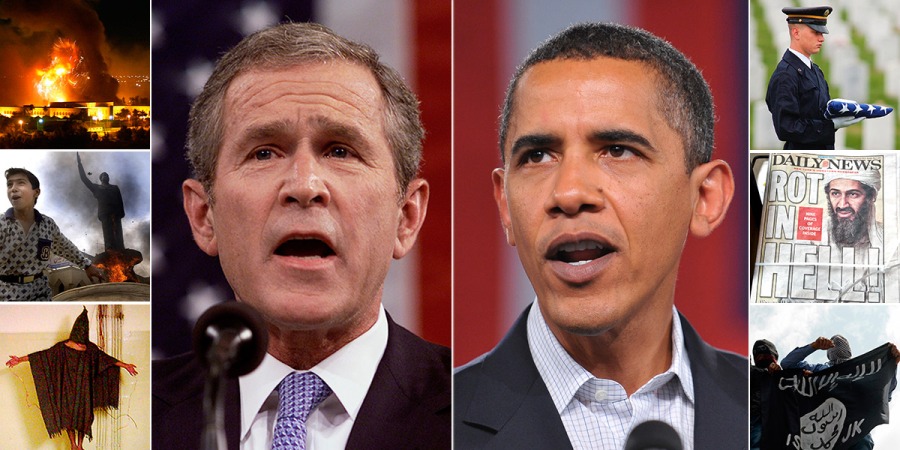 If you can acknowledge the recurring cycle of events, then you must acknowledge that the powerful US Presidents fit perfectly into the pattern of the Horsemen. Promising peace and prosperity through political deals, they have led America and the world from one catastrophe to the next. The following is just a brief sampling.