“And the kings of the earth, and the great men, and the rich men, and the chief captains, and the mighty men, and every bondman, and every free man, hid themselves in the dens and in the rocks of the mountains…For the great day of [God’s] wrath is come; and who shall be able to stand?” (Revelation 6:15-17)

The fact that increasing numbers of people believe in aliens who will come in peace has far greater importance than a simple statement of either 1) gullibility by people who get all their information from television or 2) insight by people who have studied the spirit dimension from the perspective of either Creator God or the rebel gods.

It’s the issue of belief.

The Power of Positive Thinking

Beliefs are the thoughts in our head that influence our behavior, attitude and actions. The beliefs that affect our lives are either Empowering Beliefs which enable us to lead flourishing lives or Self Limiting Beliefs that stop us from achieving our goals and where we live a life where we languish and flounder.

These statements from a highly successful motivational speaker are consistent with biblical truths.

The lie about belief is that it creates your desired destination.

The truth about belief is that it will lead us to an existing destination.

The lie is offered in magic.

At the dawning of the third millennium, a belief in the reality and efficacy of witchcraft and magic is no longer an integral component of mainstream Western culture…however, beliefs in witches and sorcerers are still firmly retained…in an age characterised by the faltering of elite intellectual self-confidence…and the erosion of faith in human ‘progress’ – symbolised by the apparent failures of science and socialism…

the high magic of the Renaissance magus, a learned and visionary figure combining elements of the scientist and the priest, and entranced by the noble prospect of man controlling the cosmos by magical means [emphases added here and below]…humanity could realise its highest aspirations to understand and to compel the forces that govern the universe, and to make its nearest approach to divinity. Renaissance high magic rested firmly on the quasi-mystical philosophy of Neoplatonism…the so-called Hermetic writings…

Crucial to this conception was the Neoplatonist idea of the spiritus mundi, the spirit of the world, which infuses all things and which is the medium through which the influence of the stars is drawn down to earth. The purpose of magic then becomes that of attracting benign stellar influences and hindering malign ones; and the magician must study how to compel these forces by carving images on stones (talismans), chanting and singing mystical songs, making certain gestures and producing appropriate odours, all at the astrologically propitious times. The spiritual unity of the world is the ground of the ‘sympathies’ among its parts which are the magician’s concern…There was much debate about the extent to which high magic relied on demons...some of its exponents…talk of ‘planetary deities‘, invited the charge that it was not really a natural magic, but rather a demonically facilitated one, and as such reprehensible. Some influential theorists…were actually willing to admit that their magic in some of its aspects employed demonic power…

Can we not see that the claim that higher powered spiritual union with the human unstable soul empowers the human is a lie?

All spirits are spin-offs of the Creator Holy Spirit, so regardless of the moral or immoral objective of the spirit’s interaction, they all function in the same way with four dimensional mortals.

The power of the hyper dimensional being flows through the human soul that is joined by believing and receiving the spirit. The soul then takes on the spirit’s values, motivations, goals and objectives, and executes them through the actions of the soul-directed body.

“as many as received him, to them gave he power…that believe on his name / attributes:” (John 1:12)

The objective of the superhuman spirit’s interaction with a human is always to empower the will of the hyper dimensional spirit in the four dimensional world. Unlike a lying spirit, the Bible doesn’t deny this. Note that in the following passages the ultimate objective of the sharing – ergo exponential increase – of spirit power / glorifying can be traced back to the will of the original spirit in the chain of command.

“These words spake Jesus, and lifted up his eyes to heaven, and said, Father, the hour is come;

I have manifested thy [secret] name [giving access to your power] unto the men which thou gavest me out of the world…Now they have known that all things whatsoever thou hast given me are of thee.

For whose purpose? the Father’s!

According to this line of reasoning, the gods and their chosen inhabited one / christ are empowered to return when – like Jesus Christ – they are believed on, called for, and welcomed.

The world is a religious jungle with false prophets as detailed above and in the previous post Signs of the Times.

In particular, the New Age Movement for the spiritually minded, and equating aliens with the ancient gods for the open minded, has unlocked barred doors of opportunity for hyper dimensional beings by whatever name they are called.

Paganism remains a small, but growing, minority religious movement. The 2014 Pew Institute Religious Landscape Study reported that…In the US, the Pagan population is about the size of a small Protestant denomination.

And that’s just in the religious domain. So-called entertainment has broken down the barriers to the souls in a massive media onslaught, especially of our children.

We make a grave mistake when we think of evil spirits only as frightening monsters who assault us against our will, like a psychopath in a Halloween movie. (I was going to include a graphic here but it was just too creepy.) On the contrary, they are fascinating individuals whose real powers and lures of enriching our lives draws us to willingly identify with them.

It doesn’t take the genius mind of Stephen Hawkins to anticipate the next step in the relationship between a human being and his / her Master, “Ascended” or otherwise. The magicians, sorcerers, witches and others who think they are calling in beneficent spirits to do their bidding inevitably find themselves in bondage to the spirit being.

Ultimate bondage is experienced by any short-sighted individual who goes to a drug dealer, a loan shark, or a crime boss for a fix. They all will give you what you want in the short term, but it will definitely cost you sooner or later. The house always wins.

one thing that remained largely unchanged throughout the course of the series was its core: the relationship between Walt and Jesse Pinkman.

The engine that drove Breaking Bad forward, the torrid partnership between the proverbial master and protege that was Walt and Jesse was inarguably the strongest pillar of Breaking Bad…

While Jesse’s life may not have been that of a decent upstanding citizen when he first encounters Heisenberg, where he ends up is ultimately far worse, as the the series concludes with Jesse being an escaped slave whose life will remain on the run due to various previous crimes, including, you know, murder. [Emphasis added.]

But in between the beginning and the end, there’s a whole lot of middle that operates in an emotional gray area, and that gray area can be boiled down to one question: did Walt ever actually care about Jesse?…

Even when considering the fact that Walt eventually freed the chain bound Pinkman from his Neo-Nazi captors, it was only through happenstance…He didn’t go there to save Jesse — he saved Jesse because he was there.

So what are we left with? Like their relationship itself, a bit of a gray area. Walt did — and up until the moment he dies, does — care about Jesse.

But, just like everyone else in the wake of his blood-soaked, meth-fueled destruction, he only cared when that adoration didn’t interfere with his own personal gain.

the Nazi Party and Adolf Hitler himself were very interested in ancient mythology and occultism…The activities…included rituals, the evocation of ancient divinities, and a search for the “Black Sun”, a source of immeasurable energy that would give Germany enormous power. 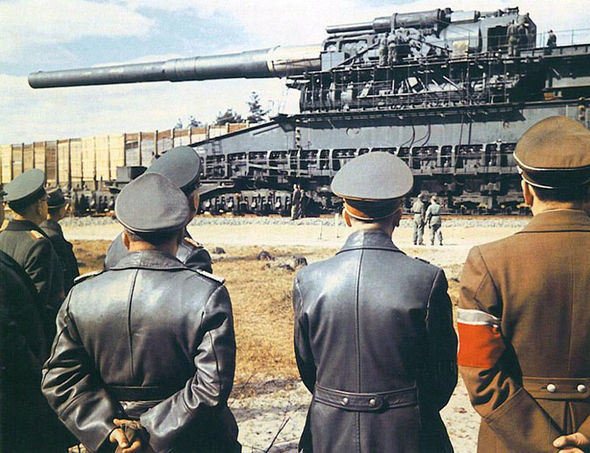 Rudolf Hess, Hitler’s right-hand man at the start of the war was a member of Thule. The members of the Vril society were another secret organisation closely associated with Nazi ideology…

“They saw themselves as godlike super-being.”

From nerve and disease agents to the feared and coveted V-1 and V-2 rockets, Nazi scientists worked on an impressive arsenal. As the war came to a close in 1945, both American and Russian officials began scheming to get that technology for themselves… 88 Nazi scientists arrived in the United States and were promptly put to work for Uncle Sam.

In the days and weeks after Germany’s surrender, American troops combed the European countryside in search of hidden caches of weaponry to collect. They came across facets of the Nazi war machine that the top brass were shocked to see…That is really where Paperclip began, which was suddenly the Pentagon realizing, ‘Wait a minute, we need these weapons for ourselves.’

There will come a day of reckoning, a choice to be made by every individual, whether to choose to do the wrong thing in order to save one’s own quality of life, or to do what the blaring warning alarm in one’s conscience alerts you is the right thing to do regardless of the loss over the direction of your life, or worse, your loved ones’ lives. This is what separates out the people who choose God’s right way from the wicked who chose to go their own way.

The Bible is not a guidebook to a lifestyle, it is a guide to life itself. As with any other, only those who develop wisdom and understanding from studying the subject recognize and know how to respond with life sustaining power when confronted by death-dealing forces.

“The Endless” is proof…this is a movie that plays with our perceptions of time, space, and reality, and sketches the outlines of unimaginable [endless] terror…

Things become unmoored from scientifically verifiable truth…There are so many strange moments and images, most of them tossed-off…effectiveness comes from comparing what we’re told would happen against what actually does happen. [Emphasis added.]