The ultimate downfall of Christianity is the belief in the Trinity.

“And there shall come forth

And the 1) spirit of 3) the LORD / YHVH shall rest upon 2) him, the spirit of wisdom and understanding, the spirit of counsel and might, the spirit of knowledge and of the fear of the LORD; And…with righteousness shall he judge the poor, and reprove with equity for the meek of the earth: and he shall…slay the wicked.” (Isaiah 11:1-4)

There is, in fact, no biblical Trinity. There is only Singularity.

This is the crucial difference between uniting with Almighty God versus serving false gods. Only the Singularity can, in reality, support his followers with his infinite source of power.

False gods can only distribute spoils of war amongst their supporters, and as these naturally diminish from the slaughter of war, they turn amongst themselves in desperation to be the last survivors.

And “A kingdom divided against itself is brought to desolation, and…cannot stand.” (Matthew 12:25)

“And there appeared another wonder in heaven; and behold a great red dragon…And his tail drew [forced away] the third part of the stars of heaven, and did cast [throw away, discard] them to the earth…” (Revelation 12:3-4)

The above passage is commonly taught as the Dragon luring 1/3 of the righteous angels into following him. However, by maintaining internal consistency in the definition of the word cast, rather than arbitrarily focusing on the use of the tail to define the result of the action, we should understand that the report of angels being cast to earth indicates a conquest rather than a following.

“And there was war in heaven: Michael and his angels fought against the dragon; and the dragon fought and his angels, And prevailed not; neither was their place found any more in heaven. And the great dragon was cast out, that old serpent, called the Devil, and Satan, which deceiveth the whole world: he was cast out into the earth, and his angels were cast out with him. (Revelation 12:3-9)

“Be sober, be vigilant; because your adversary the devil, as a roaring lion, walketh about, seeking whom he may devour:” (I Peter 5:8)

Satan is indeed active on earth and very powerful.

“Michael the archangel, when contending with the devil…durst not bring against him a railing accusation, but said, The LORD rebuke thee.” (Jude 9)

In the same plot popularized by the movie Men in Black, certain factions of aliens agree to submit to Satan son of Lucifer who promises in return to lead them against Tiamat / Begetter / Outer Space / rival faction of angels / aliens.

A parallel to this would be America’s most powerful rocket to date, the Saturn rocket, having come from plundering the Nazi’s rocket most powerful rocket at that time, the V2, then developing it into a more powerful thing through the minds and energies of a host of rocket scientists.

Locked in chains in the chaotic sea below heaven and above earth with the other angels who procreated hybrid monsters with human women, Lucifer is released by human collaborators at the end of time.

“Hast thou commanded…and caused the dayspring to know his place…That it might take hold of the ends of the earth, that the wicked might be shaken out of it…turned as clay to the seal; and they stand [still] as a garment.” (Job 38:12-15)

“the angels which kept not their first estate, but left their own habitation, he hath reserved in everlasting chains under darkness unto the judgment of the great day.” (Jude 1:6)

“The rocket will free man from his remaining chains…open to him the gates of heaven.”

The world’s first functional long-range ballistic rocket, the V-2…was so technologically advanced that Nazi Germany became the first country to put an object made by human hands into space. During one particular test in the summer of 1944…their rocket soared past the “Kármán Line”—which…puts the beginning of space at…roughly sixty-two miles straight up—by almost fifty miles…

Hitler…wanted to punish the Allies by turning their pretty little cities into smoldering wastelands…an order was given for thousands of V-2s to be built. The goal was to launch them like locusts towards New York and Washington, D.C. In time, maybe they could even reach Chicago…

The rocket was no longer something of fantasy or the movies. It was now a weapon of mass murder…

Walter Dornberger was a brilliant designer who held four patents in rocket development…After…being involved in crimes against humanity, Dornberger would go on to design high-performance aircraft for the United States. He would also play a significant role in the early development of the Space Shuttle…

Arthur Rudolph, who was in charge of production…didn’t care about prisoners dropping dead under his command; he only cared about quality control…make sure there was a constant supply of prisoners at Dora…

in the decades to come he, von Braun, and Dornberger would all become indispensable to America’s aerospace program. They would receive awards, honors, and ticker-tape parades. Their new country would welcome them. They would be showered with riches.

When the Americans discovered what was hidden at Dora-Mittelbau in April 1945, they packed up 300 rail cars were loaded down with fuel tanks, fins, nosecones, servomotors, and engines. These pieces of the future were sent across the Atlantic to another secret camp: The White Sands Proving Grounds in New Mexico.

The V-2 was studied, examined, copied, and made better. On October 24, 1946, a camera was bolted to the side of the rocket and, as it roared…to sixty-five miles (three miles above the Kármán Line) and took the very first photograph from space…Scientists called it a “Rocket-Eye View” of the world. Nothing quite like it had ever been seen before…

A few years later, von Braun launched America’s very first satellite. He made the cover of TIME magazine and was hailed as “America’s Missileman”…There was no mention of the V-2…

The Saturn V was monstrous. Colossal…

Today, rusted out parts of V-2s are still buried in the tunnels of Dora-Mittelbau [slave factories complex], and an entire Saturn V in pristine condiion is on display at the Kennedy Space Center. Wernher von Braun was in charge of both…

Their stories are not only about shadow and sunlight, but about who we are, and what we might become. These rockets we made can lift us up, or carry the payload of our undoing.

“And I stood upon the sand / border of the sea / of outer space, and saw a beast rise up out of the sea…and the dragon / Lucifer gave him his power, and his seat, and great authority….And they worshipped the dragon which gave power unto the beast:” (Revelation 13:1-4)

Marduk is Lucifer’s cloned grandson, the ancient Sun god of Heaven in Babylon.

“thou shalt take up this proverb against the king of Babylon / Marduk, and say, How hath the oppressor ceased!…Hell from beneath is moved for thee to meet thee at thy coming: it stirreth up the dead for thee, even all the chief ones of the earth; it hath raised up from their thrones all the kings of the nations. All they shall speak and say unto thee, Art thou also become weak as we? art thou become like unto us?…(Isaiah 14:4-18)

Marduk was known by many national names, but can be identified as the same god through his role as the foremost oath god in interstate covenants and his wined solar disc sigil.

In Rome he was known as Apollo. See previous post for details.

In ancient Persia / Iran he was known as Mithra.

Mithra appears suddenly in Roman archaeology in the last quarter of the 1st century AD…at the time of [the concurrent spread of acceptance] of Jesus. Mithraism was essentially a soldier’s religion: Mithra, its hero, was a divinity of fidelity, manliness, and bravery; the stress it laid on good fellowship and brotherliness, its exclusion of women…this deity was honored as the patron of loyalty to the emperor.

In a Roman context, Mithras was…the savior of initiates of his cult…

By the Roman legionnaires, Mithra—or Mithras, as he began to be known in the Greco-Roman world—was called “the divine Sun, the Unconquered Sun.” He was said to be “Mighty in strength, mighty ruler, and greatest king of gods! O Sun, lord of heaven and earth, God of Gods!” Mithra was also deemed “the mediator” between heaven and earth,

Mithraism flourished in Rome in the 2nd through 4th centuries AD as the chief rival to Christianity.

The Emperor Constantine, also known as Constantine the Great, made the practice of Christianity legal in Rome, but continued to have his coins inscribed with the words, “Sol Invicto Comiti”, which means Committed to the Invincible Sun.

The birthday of the unconquered sun was celebrated at the Roman festival of Dies Natalis Solis Invicti on December 25, and it is often theorized that Constantine had a hand in selecting this day as the celebration date of the birth of Christ as well…

Seemingly, Constantine…viewed Sol Invictus as very similar to the Christian god. His adoption of Christianity in the Roman Empire was more likely a matter of political strategy than religious conviction.

After the acceptance of Christianity by the emperor Constantine in the early 4th century, Mithraism rapidly declined.

I put it to you that this militaristic religion did not in fact decline.

While the liturgies of all the religions of classic antiquity have almost totally disappeared – in marked contrast to the Bible it should be noted – the ancient Mithraic Liturgy survived into Christian times and provides an unimpeachable explanation for the process of merging the spirit of a god with a human.

The Mysteries of Mithra…were translated into Greek during the Alexandrian epoch…A scrupulous respect for the traditional practices of their sect characterized the Magi of Asia Minor, and continued…among their Latin successors. On the downfall of paganism, the latter still took pride in worshipping the gods according to the ancient Persian rites which Zoroaster was said to have instituted. These rites sharply distinguished their religion from all the others that were practised at the same time in Rome, and prevented its Persian origin from ever being forgotten.

In the Mazdean service, the celebrant consecrated the bread and the water which he mingled with the intoxicating juice of the Haoma prepared by him, and he consumed these foods during the performance of his sacrifice…for the Haoma, a plant unknown in the Occident / West, was substituted the juice of the vine. A loaf of bread and a goblet of water were placed before the mystic, over which the priest pronounced the sacred formula. 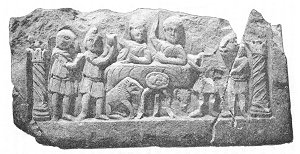 A curious bas-relief recently published shows us the spectacle of this sacred repast. Before two persons stretched upon a couch covered with pillows is placed a tripod bearing four tiny loaves of bread, each marked with a cross. Around them are grouped the initiates of the different orders, and one of them, the Persian, presents to the two a drinking-horn; whilst a second vessel is held in the hands of one of the Participants. These love feasts are evidently the ritual commemoration of the banquet which Mithra celebrated with the Sun before his ascension. From this mystical banquet, and especially from the imbibing of the sacred wine, supernatural effects were expected. The intoxicating liquor gave not only vigor of body and material prosperity, but wisdom of mind; it communicated to the neophyte the power to combat the malignant spirits, and what is more, conferred upon him as upon his god a glorious immortality.

As this study proceeds we will discover that Rome’s state religion is simply a cover, shall we say a shroud, for Rome’s militaristic, secretive, and preferentially, if no longer exclusively male, Mithraism.

“But! thou [Marduk, King of Babylon] art cast out of thy grave like an abominable branch” (Isaiah 14:19)

There is no endless life from this Trinity, only endless death.