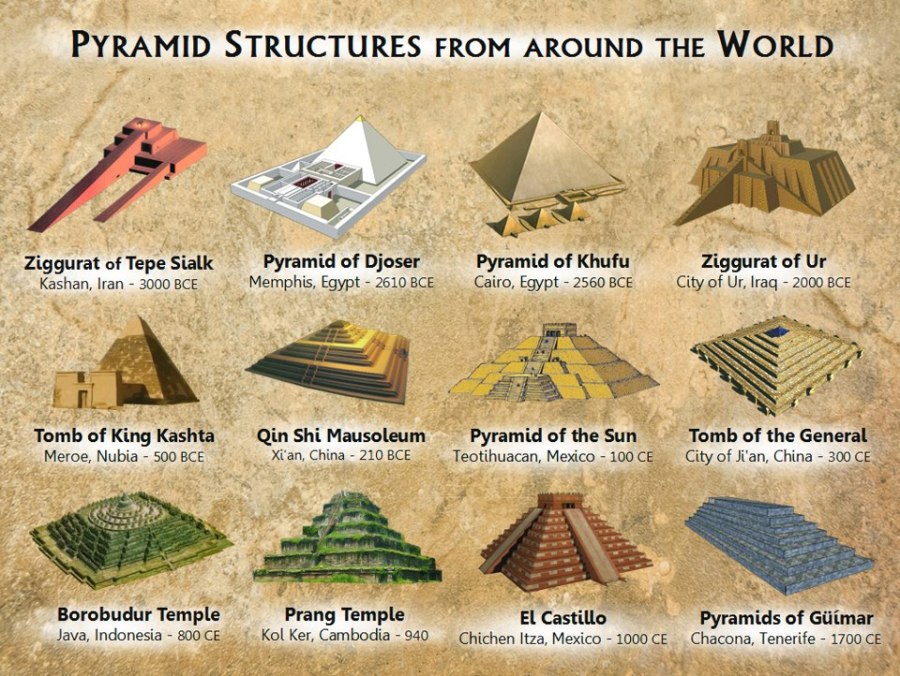 In a massive blow to the evolutionary paradigm, anthropologists have determined that it was the dark-skinned Hamites who established the first historic civilization and transported their religion to all the peoples of the world regardless of their genetic ancestry.

This is the Way of Cain. We can logically conclude that Noah’s son Ham carried onto the ark a library of esoteric fallen angelic knowledge which was passed to Ham’s son Cush.

This ancient civilization of the Cushites, out of which the earliest cultures of Egypt and Mesopotamia grew, was not confined to the Near East.Traces of it have been found all over the world…“This peculiar development of the Neolithic culture…which Elliot Smith called the Heliolithic (sun-stone) culture, included many or all of the following odd practices: (1) Circumcision, (2) the queer custom of sending the father to bed when a child is born, known as Couvade, (3) the practice of Massage, (4) the making of Mummies, (5) Megalithic monuments (i.e. Stonehenge), (6) artificial deformation of the heads of the young by bandages, (7) Tattooing, (8) religious association of the Sun and the Serpent, and (9) the use of the symbol known as the Swastika for good luck. Elliot Smith traces these associated practices in a sort of constellation all over this great Mediterranean / Indian Ocean-Pacific area. Where one occurs, most of the others occur…The first civilizations in Egypt and the Euphrates-Tigris valley probably developed directly out of this widespread culture.” (Outline of History, pp. 141-143)…Then we have the view of Stephanus of Byzantium, that: “Ethiopia was the first established country on earth; and the Ethiopians were the first who introduced the worship of the gods, and who established laws.” The vestiges of this early civilization have been found in Nubia, the Egyptian Sudan, West Africa, Egypt, Mashonaland, India, Persia, Mesopotamia, Arabia, South America, Central America, Mexico, and the United States.

Current plans to build land-based transportation systems connecting all the peoples of the world demonstrates the ability of early civilizations to easily import-export their products and ideas through the same interconnected web of traders. 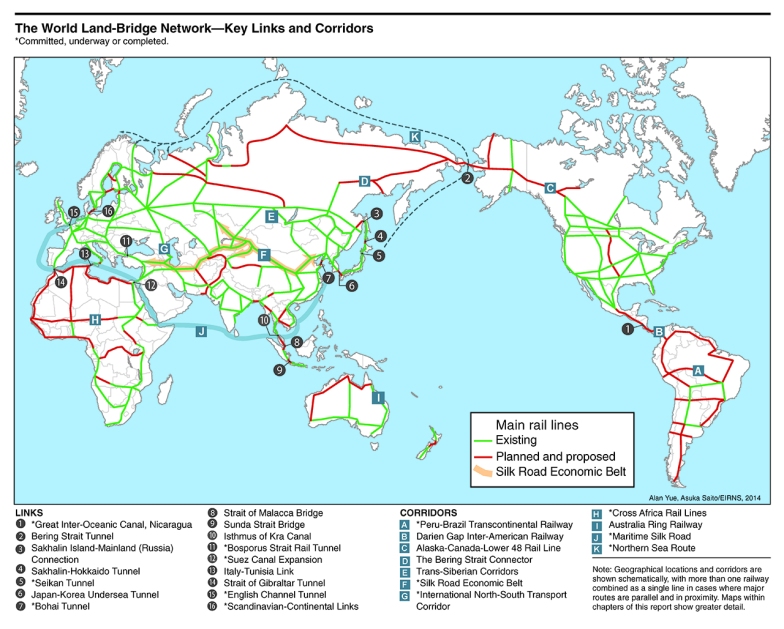 The great ancient civilizations of Egypt and West Africa traveled to the Americas, contributing immensely to early American civilization by importing the art of pyramid building, political systems and religious practices as well as mathematics, writing and a sophisticated calendar…

One of the first documented instances of Africans sailing and settling in the Americas were black Egyptians led by King Ramses III, during the 19th dynasty in 1292 BC. In fact, in 445 BC, the Greek historian Herodotus wrote of the Ancient Egyptian pharaohs’ great seafaring and navigational skills. Further concrete evidence, noted by Dr. Imhotep and largely ignored by Euro-centric archaeologists, includes “Egyptian artifacts found across North America from the Algonquin writings on the East Coast to the artifacts and Egyptian place names in the Grand Canyon.”

In 1311 AD, another major wave of African exploration to the New World was led by King Abubakari II, the ruler of the fourteenth century Mali Empire, which was larger than the Holy Roman Empire. The king sent out 200 ships of men, and 200 ships of trade material, crops, animals, cloth and crucially African knowledge of astronomy, religion and the arts.

When most people think about ancient Mexico, the first civilizations that come to mind are the Incas, Aztecs and the Maya. However, during the early 1940’s archeologists uncovered a civilization known as the Olmecs 1200 BC, which pre-dated any other advanced civilization in the Americas… 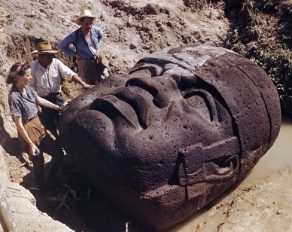 Olmecs are perhaps best known for the carved colossal heads found in Central Mexico, that exhibit an unmistakably African Negroid [Hamitic] appearance. Ancient African historian Professor Van Sertima has illustrated how Olmecs were the first Mesoamerican civilization to use a written language, sophisticated astronomy, arts and mathematics and they builtthe first cities in Mexico, all of which greatly influenced the Mayans and subsequent civilizations in the Americas. “There is not the slightest doubt that all later civilizations in [Mexico and Central America], rest ultimately on an Olmec base,” once remarked Michael Coe, a leading historian on Mexico…

A clear indicator of pre-Columbus African trans-Atlantic travel is the recent archeological findings of narcotics native to America in Ancient Egyptian mummies, which have astounded contemporary historians. German toxicologist, Svetla Balabanova, reported findings of cocaine and nicotine in ancient Egyptian mummies. These substances are known to only be derived from American plants. South American cocaine from Erythroxylon coca and nicotine from Nicotiana tabacum. Such compounds could only have been introduced to Ancient Egyptian culture through trade with Americans.

Similarities across early American and African religions also indicate significant cross-cultural contact. The Mayans, Aztecs and Incas all worshipped black gods and the surviving portraits of the black deities are revealing. For instance, ancient portraits of the Quetzalcoatl, a messiah serpent god, and Ek-ahua, the god of war, are unquestionably Negro with dark skin and wooly hair. Why would native Americans venerate images so unmistakably African if they had never seen them before? Numerous wall paintings in caves in Juxtlahuaca depict the famous ancient Egyptian “opening of the mouth” and cross libation rituals. All these religious similarities are too large and occur far too often to be mere coincidences.

Professor Everett Borders notes another very important indication of African presence, which is the nature of early American pyramids. Pyramid construction is highly specialized. Ancient Egypt progressed from the original stepped pyramid of Djosser, to the more sophisticated finished product at Giza. However, at La Venta in Mexico, the Olmecs made a fully finished pyramid, with no signs of progressive learning. Olmecian and Egyptian pyramids were both placed on the same north-south axis and had strikingly similar construction methods. Tellingly, all of these pyramids also served the same dual purpose, tomb and temple.

Wherever that Indian Ocean touches land, it finds dark-skinned people with strongly developed jaws, relatively long arms and kinky or frizzly hair. Call that the Indian Ocean or Negroid division of the human race. 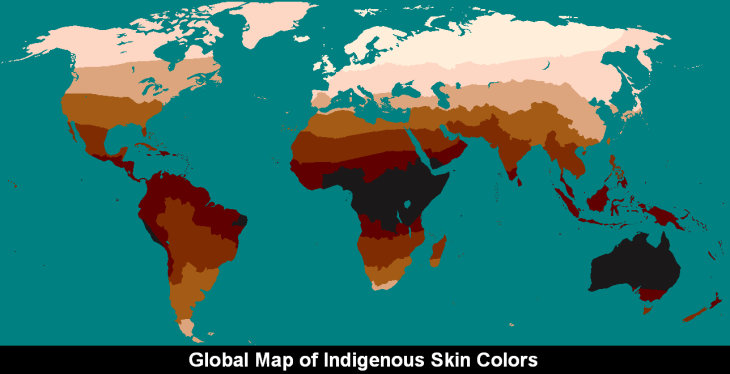 The Olmecs are the oldest of the civilizations that flourished in Central America, beginning about 1900 BC…“The first indications of Shamanic religious practices date from this period. The enormous size and scope of Olmec ruins gave birth to the idea that the land was once populated by giants… They lay the foundation for all the future civilizations in Mesoamerica.” 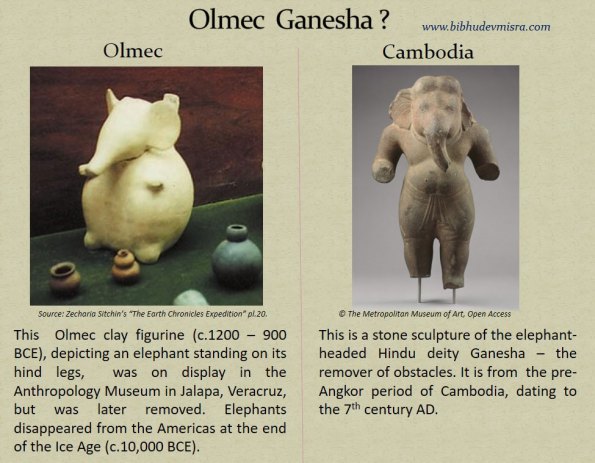 By 700 BC, the genetically Semetic Mayans had replaced the Cushite Olmecs in Central America. They appear already having hieroglyphics which they used to create solar calendars carved in stone. According to them, the world was created on August 11, 3114 BC.  Hmmm, this corresponds to the invasion of watchers to earth, the gods worshipped in astronomically oriented religions around the world, including our own so-called science. Interestingly, in Hinduism “maya” literally means “that which issues forth from the source.” The similarities between the cyclical Hindu and Mayan religions are striking. 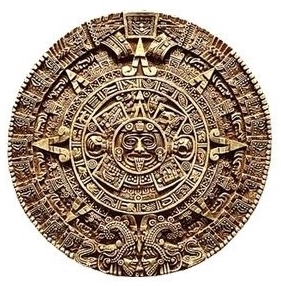 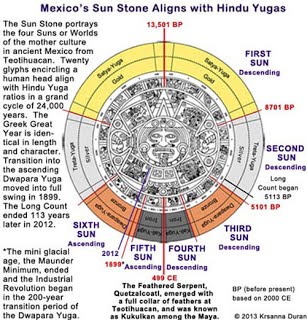 From about 300 BC – 1000 AD millions of Mayans lived in great cities. Mathematics, astronomy, architecture and visual arts were perfected in their highly advanced civilization.