Genetic studies have determined that all humans share a common male and female ancestor, informally calling them Adam and Eve.

Male ancestry is tracked, logically, through the male-specific Y chromosome (called Y-DNA). Geneticists have isolated distinct human Y-chromosome DNA haplogroups based on sequential accumulation of mutations over time. The man with the original non-mutated DNA, informally known as Y-chromosomal Adam, is acknowledged by geneticists to be the male ancestor of all living humans.

According to genetic studies, at one time in the past humanity experienced a “population bottleneck…a sharp reduction in the size of a population due to environmental events such as…flood.”

According to the Bible, after a world-wide flood approximately 4,500 years ago, only four men were available to repopulate the entire earth with humanity.

The investigators deny the validity of the historical biblical account, which is much too recent in time for the Evolutionary model. However, the studies’

disproves their Evolutionary model and establishes the unscientific nature of their claims.

For instance, the Y-haploid study ranks the Y Haplogroups from

Can anyone take this seriously?!

Beside the overt racism granting Europeans the highest development and survival on the evolutionary scale, the most informative element of the time chart should be glaringly obvious, and it’s not even the pervasive use of the modifier “possible”.

It is the fundamental irrationality of the Evolutionary model.

Just a couple of examples:

This also highlights the elitists’ fundamental racism, despite masses of scientific evidence to the contrary.

At the turn of the century elitists used Darwin’s newly developed idea of evolution to claim that this Negroid division of the human race was not, after all, a division of the human race, but subhuman on the evolutionary scale. “Scientists” from the most highly respected universities and the prestigious Smithsonian Institute ruled that  dark-skinned peoples were on par with animals so did not qualify for “We, the People” rights.

The Nazis’ 1940’s genocidal policies were rooted in Darwinism and established by American “scientists” at the turn of the century.

Further discoveries from the human genome and its expression in the population as a whole has brought about the insight that Skin Color is Not Race.

The genes which are responsible for most of the variation between human populations in complexion have been identified…About half a dozen genes of large effect can explain 90% of…variance. Some of the genes, such as SLC24A5, are so ancestrally informative that…you can ascertain ancestry in mixed populations simply by inspecting its frequency [within the population]. With that said, I recently reread an “old” paper from the ancient days before human pigmentation was elucidated with any depth, that is, 2004… Implications of correlations between skin color and genetic ancestry for biomedical research.

A quick summary of the research: it studied three groups of people known to have a mix of ancestry to see if skin color was a reliable predictor of ancestry, i.e. does lighter skin match, or correlate, with more European ancestry and darker skin with more African? It turns out, it does not.

As you can see the correlation is relatively weak between ancestry and complexion in the Mexican and Mexican American sample. It is stronger among Puerto Ricans. And modest among the African groups...The reason is that only a small subset of genes control the variation which we use to classify people as members of a particular population…Puerto Rico is a small island, and has been subject to a lot of immigration from Spain in the 20th century. Correlation between skin color and European ancestry probably has to do with a great deal of recent admixture.

In order to align with the Evolutionary model, advances in knowledge of genetic mutations, currently available in our COVID-obsessed era, have not been applied to the human Y-chromosome haplogroups genetic analyses.

Adam is estimated to have lived roughly 236,000 years ago based on the calculation that the human Y-chromosome accumulates roughly two mutations per generation.

In reality, “Every time human DNA is passed from one generation to the next it accumulates 100–200 new mutations, according to a DNA-sequencing analysis of the Y chromosome…”

When we change the biased and outright deceptive factor of 1-2 mutations per generation to the scientifically known 100-200 mutations per generation, we arrive at the calculation of only 2,000 -4,000 years since the Most Common Ancestor. This is consistent with the time of Noah’s flood, and marks Noah, only “the seventh from Adam” who was “perfect in his generations” i.e. genetic ancestry, as carrying the original human’s created genetics.

A fumbling attempt to counter this longitudinal research data is made by the unscientifically wild guesswork of “But the mutation rate might be somewhat different on other chromosomes, points out Adam Eyre-Walker, an evolutionary biologist.”

As an evolutionary biologist he knows that is not “might be” but “in fact.”

Female ancestry is tracked through female-specific mitochondrial DNA. But it doesn’t help the evolutionary case.

one of the oldest DNA lineages on Earth [is] a collection of genes called L0, which is passed down maternally through mitochondria and has survived remarkably unchanged in some populations…

Today, the L0 lineage is found most commonly in the Khoisan people, two indigenous groups living in southern Africa.

Wow. I’m pretty sure this is not what C.S. Lewis had in mind when he wrote about “daughter of Eve” in his very English The Lion, The Witch and the Wardrobe, but there we have it.

WHAT TO KNOW ABOUT THE KHOISAN, SOUTH AFRICA’S FIRST PEOPLE

have some of the most incredible knowledge and insights into wild animals and the environment that they inhabit…ability to extract nutrients from seemingly inconspicuous plants and survive in generally arid or inhospitable environments…comprehensive knowledge about the medicinal values of plants, and they use natural items to cure hundreds of ailments without modern medicine…

This certainly demonstrates the perpetuation of an ancient way of life while isolated from other people groups unable or unwilling to maintain existence in such a minimalist environment. One could even call it biblical.

“For we brought nothing into this world, and it is certain we can carry nothing out. And having food and raiment let us be therewith content. But they that will be rich fall into temptation and a snare, and into many foolish and hurtful lusts, which drown men in destruction and perdition.” (I Timothy 6:7-9)

They were much more widespread than today, their modern distribution being due to their decimation in the course of the Bantu expansion…

about 1,000 years after their displacement by the Bantu…population dropped after the Khoi were exposed to smallpox from Europeans…

colonial expansion…led to the Khoijhou losing their land and livestock as well as dramatic change in the social, economic and political development…

In Botswana, many of the indigenous San people have been forcibly relocated from their land to reservations…Their lands lie in the middle of the world’s richest diamond field.

Today we are witnessing the end of the Khoisan people.

This is because viruses – which are essentially small bits of DNA in a protein capsule – reproduce by highjacking the hosts’ DNA and enslaving it to manufacture the viral proteins instead of the hosts’ intended products. Some of the virus’ DNA often gets left behind.

The report—produced in partnership with universities, research institutions, UN agencies and the secretariats of several multilateral environmental agreements— identifies key anthropo- genic [originating in humans] drivers for the emergence of zoonoses…

This defines the actions of historic people groups migrating into unsettled territories.

In Guns, Germs, and Steel, Jared Diamond outlines the theory of geographic determinism, the idea that the differences between societies and societal development arise primarily from geographical causes..

First, he shows that agricultural societies developed immunities to deadly diseases like smallpox. Constant proximity to domesticated animals, combined with increased population density, meant that new germs were constantly circulating in agricultural societies. As a result, these societies became resistant to many epidemics—those who couldn’t survive died off, while those with [infection-created genetic] immunities survived and passed on their [genetic] immunities to their offspring.

We know for certain that individuals and groups have traveled and migrated around the world. Known geographical dispersion, rather than supposition of unproven length of time for some groups but not others, gives us the credible explanation for the development of disparate Y-chromosome haploid groups.

This theory is confirmed by the National Institutes of Health. Population migration, not time, is the cause of mutations creating distinct population groups.

The most accurate map of the world, used on the United Nations flag, contrasts sharply with the inaccurate juxtaposition of the continents shown on the commonly used maps. The accurate map reveals the shorter distances needed for cross-oceanic travel as well as overland. 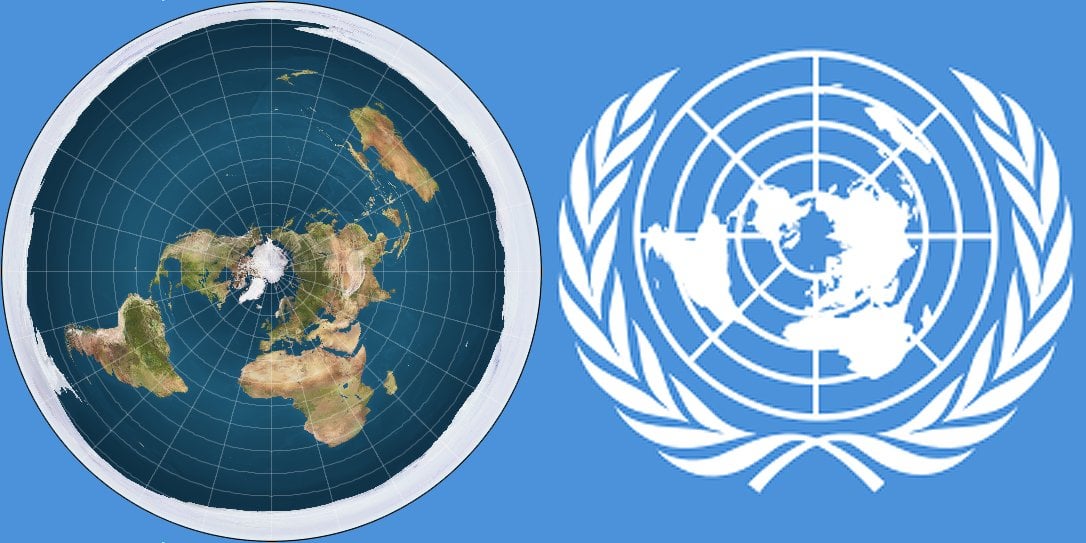