Missing link term is frequently used now, mostly by journalists and in popular literature. Specialists understand perfectly that formation of Homo sapience species is a long process, and as evolution is continuous, it is obvious that there were MANY SPECIES between a modern human and our ancestral ape living about 10 mya. These species were slowly, one by one, discovered by anthropologists for the last 100 years. As a result we see not just a link, but a chain of intermediate species.

First, this insults the reader’s intelligence. “A specialist would understand perfectly…” A child can understand how the lack of connecting pieces between the parts renders the entirety nonfunctional.

Second, this is cultic, requiring the reader to accept the word of the “authority” without question.

Third, this is Newspeak, avoiding the very real issue of the failure of anthropology to discover the stages of change between species by replacing that fundamental claim of Evolution with an unquestionable but irrelevant scientific knowledge of the existence of similar species.

Fourth, there is no evidence that these extinct species represent a chain of development from one to another any more than the multitude of species currently in existence.

And to stop beating a dead horse, I will end by pointing out the gross deception of “we see not just a link, but a chain,” stated with the same flourish of a magician’s misdirection.

Findings are so numerous, that their amount now becomes a problem for anthropologists, as dealing with such a number of material is increasingly more difficult.

Meanwhile, new species of fossil hominids are found quite often.

When we fact check those statements we discover they are not newspeak. They are straight up bald faced lies.

there are thousands of fossils, mostly fragmentary, often consisting of single bones or isolated teeth with complete skulls and skeletons rare, [emphases added]…

The Oldest Hominins…a little-known species of dubious taxonomy…We only have a jaw bone and a tooth, and the researchers were only able to identify one physical feature, focussing on the roots of the teeth.

The early fossils shown are not considered ancestors to Homo sapiens…

This is indicated taxonomically by the absence of “Homo” in their names.

So half of the eight “ancestors” shown in the “chain of development” don’t belong there!

Bait and switch for the uninformed and gullible.

To be certain that all fossil evidence only for speculated human precursor species is included, I’ve cross-referenced the fossil list with Wikipedia’s Timeline of human evolution which organizes evolution by taxonomy.

No fossils. Of course not. Not even stone could survive intact for 20-15 million years through the grinding and shifting of earth tectonics and smashing by cosmic missiles. So right here Evolutionists are required to suspend scientific methodology for an unsubstantiated biased belief.

Genus: Graecopithecus is based on a tooth found in Greece in 1944 and a jawbone found in Bulgaria in 1951. In 2017 an international team of paleontologists asserted the find was the oldest common ancestor of the ape and the human and proved that contrary to popular opinion among paleontologists this proved that human evolved outside of, then moved to, Africa. These claims have been disputed. To put it mildly.

Sergio Almécija…at George Washington University, says it is important to bear in mind that “Single characters are not reliable to make big evolutionary [claims].”

Australopithecus afarensis is one of the longest-lived and best-known early human species—paleoanthropologists have uncovered remains from more than 300 individuals!

In 1974, the world was stunned by the discovery of “Lucy,” the partial skeleton of a human ancestor that walked upright—and still spent time in the trees—3.2 million years ago...

The (in)conclusions drawn from Lucy’s extremely limited sample of bones are obviously unfounded.

Lucy’s incomplete skeleton does not justify the reconstruction drawings of the skull, shoulder blades, breastbone, spine, determination of height…Put the pieces together for yourself. And “the exceedingly well-preserved skeleton AL 288-1 (“Lucy“)” is called “the most significant” of all the specimens.

Compare just the V-shape of the fossil bone and the squaring of her lower jaw in the fictional imaging.  Her facial features and expression are totally imaginary and propagandist of a link between chimps and humans.

There’s much more of a link between Lucy and her namesake Lucy in the Sky with Diamonds / LSD hallucinogenics than ancestry of modern functional brains.

Anthropologists have made much of the fact that adult members of Lucy’s species—Australopithecus afarensis—had skulls 20% larger than a chimpanzee’s. Researchers have long debated what this meant for their brain power…

This is because skull size is not indicative of brain power, brain size is, and that is not dependent on skull size but skull shape. While gorillas have larger skulls than humans, humans have a lot more room in their skulls to fit their brains. On average, humans have about 1325 cubic centimeters of space for the brain inside the skull. Gorillas, on the other hand, only have about 500 cc’s. The reduced space is due to the differences in the shape of the skull.

an international team of paleoanthropologists used a synchrotron…to take super–high-resolution images of…the inside of the skull, where the brain leaves an imprint…

“the brain imprint of A. afarensis is completely apelike,” says paleoanthropologist Philipp Gunz of the Max Planck Institute for Evolutionary Anthropology. Gunz spent 7 years doing the 3D reconstruction of the skull of Dikika and six other adult and juvenile members of the species…

…evolutionary neuroscientist Chet Sherwood of George Washington University cautions that because the study is based on skulls of only two juveniles and five adults, “one needs to be cautious.”

Let me see if I have this right. When fragments of a single skeleton are found it is hailed as proof of early evolving humans. When seven full skulls of the same species prove that this is just one of about 20 extinct ape species, evolutionists caution against jumping to a conclusion.

When Australopithecus afarensis was described, i.e. officially designated a unique species, there was by no means universal acceptance in the anthropological community. Considerable debate of the validity of this species followed and continues.

The following points, though terse, are brain numbing. It is suggested that the reader scan the bolded words to catch the gist – total uncertainty due to lack of evidence.

From a scientific point of view, there is simply not enough evidence in the fossil record with far too much disagreement among the anthropologists for a layperson to place their trust in A. afarensis fossils as proof of human evolution.

Nor is there justification for automatically imposing sequencing over simultaneous existence of extinct species.

Moving on to the next set of fossils. 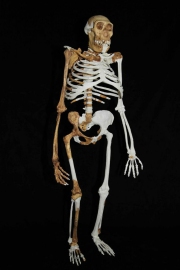 Australopithecus garhi fossils consist of the holotype specimen of a partial skull and skull fragments, a complete mandible, a humerus, an adult ulna, a partial skeleton consisting of a mostly complete left femur, right humerus, radius, and ulna, and a partial fibula, foot, and

However, only the complete mandible can be conclusively attributed to A. garhi.

A. garhi was originally considered a direct ancestor to the human line, but is now thought to have been an offshoot of the ape line.

If you’re struggling to hold on to the wealth of fossil detail for the origins of the human species let me summarize it for you.

There aren’t any fossils for the origins of the human species.

“The early fossils shown are not considered ancestors to Homo sapiens.“

The genus Australopithecus is considered to be a grade taxon, whose members are united by their similar physiology rather than close genetic relations with each other. While it is considered the ancestor of Homo, Kenyanthropus, and Paranthropus, it is NOT consisting of a common ancestor to all of its descendants.

I’ve been reading and re-reading the above paragraph and it still doesn’t make sense to me. But as a psychiatric nurse practitioner I’m used to people talking in circles so can get to the heart of the matter – obfuscating to hide an uncomfortable truth.