[In 2015] the world said hello to Homo naledi, a new species of ancient human discovered in South Africa’s Rising Star cave… at least 15 individual skeletons—one of the richest hauls of hominid fossils ever uncovered.

But one significant problem clouded the excitement over the discovery: The team doesn’t know how old the fossils are…Everyone from professional paleontologists to interested members of the public raised the same question: Why hadn’t the team dated the fossils yet?

The simple answer is: Because dating fossils is really difficult.

Scientific papers and news reports about new fossils so regularly come with estimates of age. I asked John Hawks, a biologist at the University of Wisconsin and one of the heads of the Rising Star expedition, to talk me through the various available methods—and why they have been difficult to apply to the latest finds.

absolute dating methods provide chronological estimates of the age of certain geological materials associated with fossils, and even direct age measurements of the fossil material itself…

Geologists commonly use radiometric dating methods, based on the natural radioactive decay of certain elements such as potassium and carbon…

All elements contain protons and neutrons, located in the atomic nucleus, and electrons that orbit around the nucleus. In each element, the number of protons is constant while the number of neutrons and electrons can vary. Atoms of the same element but with different number of neutrons are called isotopes of that element. Each isotope is identified by its atomic mass, which is the number of protons plus neutrons. For example, the element carbon has six protons, but can have six, seven, or eight neutrons. Thus, carbon has three isotopes: carbon 12 (12C), carbon 13 (13C), and carbon 14 (14C)…

some isotopes, like 14C, have an unstable nucleus and are radioactive. This means that occasionally the unstable isotope will change its number of protons, neutrons, or both. This change is called radioactive decay. For example, unstable 14C transforms to stable nitrogen (14N). The atomic nucleus that decays is called the parent isotope. The product of the decay is called the daughter isotope. In the example, 14C is the parent and 14N is the daughter…

The technique people are most likely to have heard of is carbon dating. It hinges upon the presence of carbon-14, a radioactive isotope of carbon that accumulates in the bodies of animals throughout our lives, and gradually decays after we die. By measuring the amounts left in a specimen, scientists can calculate when its owner died.

there is significant uncertainty in carbon dating…

The…method is far less predictive of age than is commonly supposed, especially for older samples.

The problem is that carbon-14 decays relatively quickly, as radioactive isotopes go, so this method only works well for samples this side of 50,000 years old…

Whoa! So what methods are used to establish dates older than 50,000 years ago, i.e. millions of years on the calendar of the evolution of all living things?

An alternative technique, known as electron spin resonanceor ESR…is great for dating teeth…a tooth acts like a dosimeter for radiation, in a way that depends on two things: the levels of natural radiation in its environment, and how long it was buried for. If you know the former, you can deduce the latter.

But knowing the natural radiation levels is “sort of nightmarish,” says Hawks. It involves, for example, installing actual radiation dosimeters and taking out vertical cores of sediment. And even then, the results from ESR typically need to be cross-checked against other sources of data.

The same problem as with radiocarbon-14 – no certain knowledge of the amount of carbon-14 in the atmosphere or organism at the point of death.

Radioactive carbon-14…used to analyze an organic material, such as wood, seeds, or bones, to determine a date of the material’s growth…need to be calibrated with other dating techniques to ensure accuracy…

Dendrochronology, founded in the late 1800s and early 1900s, allowed scientists to mark exact calendar dates for each ring…

Long tree-ring sequences have been developed throughout the world...An extensive tree-ring sequence from the present to 6700 BC was developed in Arizona using California bristlecone pine, some of which are 4900 years old, making them the oldest living things on earth.

Paleontologists can sometimes date a new fossil by looking at its companions in death, by finding nearby bones of other extinct animals that died within a known timeframe…

As a defense attorney, I would “Strike that!”

There is a much bigger issue that has been skirted in the above discussion about dating fossils. Fossils contain no organic remains suitable for dating with the carbon-14 or magnetic spin resonance methods. So why are the “experts” even bringing these methods into the discussion? Smokescreen for the lack of any dating methods at all?

Fossils are the preserved…traces…of ancient organisms.

Fossils are not the remains of the organism itself! They are rocks.

Fossils are therefore either sedimentary or volcanic / igneous (as in “ignite”).

And of the two, only igneous rocks can be dated.

The Rift Valley is the result of an ancient series of faults, rifts, and volcanoes deriving from the shifting of tectonic plates at the junction between the Somalian and the African plates...

The faults occurred in…a time span of some 500 million years.

So how do geologists – therefore anthropologists – calculate the age of rocks which have undergone multiple catastrophic events?

The volcanic material in tuff is well-suited for radiometric dating [via] an unstable isotope of potassium.

The fundamental assumptions in potassium-argon dating are that

(b) the system has remained closed since the material was produced, so that no argon has either entered or left the sample since formation.

The former assumption may be invalid in the case of…previously formed argon during formation under high hydrostatic pressure. [We see evidence of massive flooding again.]

Such factors result in the sample age being overestimated (Fitch, 1972)…

A lava flow that is known to have taken place in 1800-1801…was dated by potassium-argon as being 2,960 million years old. If the real dates had not been reasonably well established by other means, who could have proved that the potassium-argon dates were so wrong?…

The newly-formed lava dome at Mount St. Helens was dated to an age of 340,000 years when it was only 10 years old…

The K-Ar test is not trustworthy. Despite this it is still being used because it supports the preconceptions of the materialists.

Although only igneous rocks can be radiometrically dated, ages of other rock types can be constrained by the ages of igneous rocks with which they are interbedded.

Seriously? What is being claimed here is that

How does that even make sense?

Relative dating can be determined through comparing finds in carefully mapped strata.

One of the world’s oldest landfills was recently uncovered in Jerusalem….Through a systematic excavation of this landfill, Tel Aviv University archaeologist Yuval Gadot and his team have been able to shed light on Jerusalem during a particularly tumultuous chapter of its history—when Rome ruled, the Temple stood, and Jesus preached.

From the earliest agricultural villages through the early modern era, people have used clay vessels for almost every sort of activity…

Pottery also offers analytical evidence for dating, production and exchange through an array of scientific techniques, including Instrumental Neutron Activation Analysis, X-Ray Fluorescenceand petrographic thin-section. More than a century of continuous excavation and study have resulted in a gold-mine of data—stylistic, stratigraphic, petrographic and elemental. 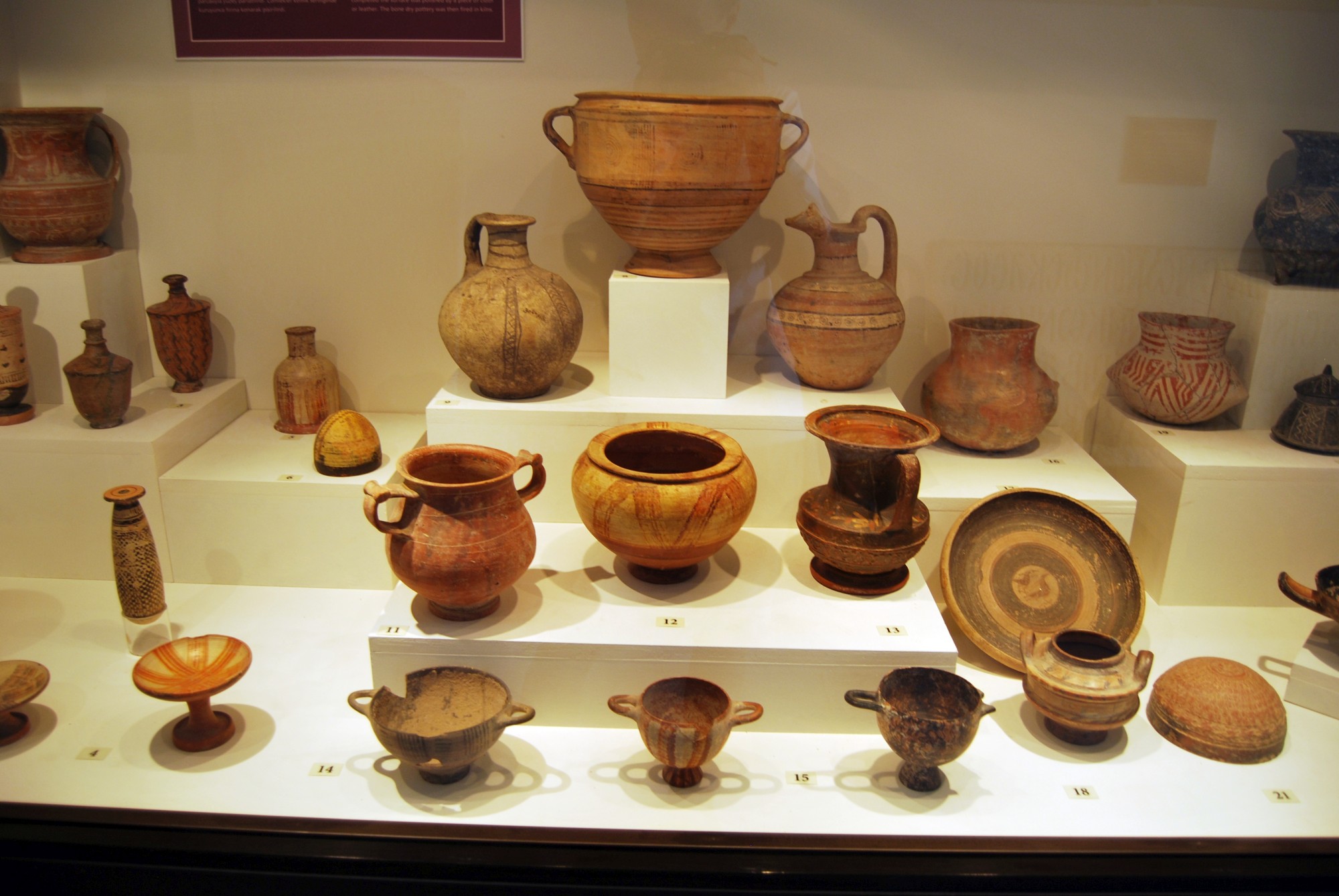 Earthenware vessels of different periods on display at Archaeological and Ethnographic Museum in Turkey from archeological sites estimated to date back to about 5,000 BC.

Several problems arise with the use of stratification for dating. Rodents, for example, can create havoc in a site by moving items from one context to another. Natural disasters like floods can sweep away top layers of sites to other locations.

Nonetheless, relative dating is paleontology’s basis for dating fossils back to millions of years old.

geologists must make an initial assumption about the way rock strata are formed. Of course, it only applies to sedimentary rocks…

I think we can all recognize that this assumed “Law” violates known evidence that during a volcanic explosion – as an airline steward once amusingly explained while giving his passenger instructions to secure their belongings -“shift happens.”

A closer view of the 250kg British bomb that was lodged in the ground at the site where workers were digging.

Following is a good example of how fossil dating cannot be taken seriously.

The discovery of carvings on a snake-shaped rock along with 70,000-year-old spearheads nearby has dramatically pushed back the earliest evidence for ritual behavior, or what could be called religion.The finding, which researchers have yet to formally publish, comes from a cave hidden in the Tsodilo Hills of Botswana, a mecca of sorts for the local people, who call it the Mountain of the Gods…

[The researchers] found…a six-meter-long rock that bore a striking resemblance to a snake, including a mouthlike gash at the end. “My first words I remember saying are, ‘My god…”

Snakes feature prominently in the traditions and the mythology of the San, sometimes called the Bushmen.

[R]eliable markers of the site’s longevity lay buried…In a one-meter-wide, two-meter-deep excavation right next to the snake, the researchers uncovered more than 100 multicolored spear points from a total of 13,000 man-made artifacts.

The tips closely resemble those found elsewhere in Africa that researchers have dated at up to 77,000 years old, Coulson says. Judging from the rare colors of the stone points and the pattern of fragments, people from far and wide likely brought them to the cave partially made and finished working them there, she explains.

The self-serving circular reasoning in this account is glaringly obvious.

Rock art by the late Stone Age hunter-gatherers can be found in the form of paintings or engravings in almost every district in South Africa…Although many are not well preserved, collectively they represent a remarkable record of the beliefs and cultural practices of the people who made them. Most were created by San hunter-gatherers…

The San have a rich oral history and have passed stories down from generation to generation. The oldest rock paintings they created are in Namibia and have been radiocarbon-dated to be 26,000 years old.

pinpointing the ages of rock art and cave art can be maddeningly difficult. Sometimes the only clue to the age of an artwork is the style in which it was painted or carved. Still, these…help us to imagine…vast expanses of time.

Or we could imagine kids passing the time during a thunderstorm.