A flood myth or deluge myth is a myth in which a great flood, usually sent by a deity or deities, destroys civilization, often in an act of divine retribution. Parallels are often drawn between the flood waters of these myths and the primaeval waters which appear in certain creation myths…Most flood myths also contain a culture hero, who “represents the human craving for life”.[1]

The flood-myth motif occurs in many cultures

The accumulated weight of evidence gathered across cultures in every part of the world testifies to the essential common features of these flood accounts. And yet this history is routinely flicked aside as “myth” independently imagined by vast numbers of cultures against all statistical odds and despite being validated by geology.

Floods in the wake of the last glacial period may have inspired myths that survive to this day...It has been postulated that these were caused by

Evolution’s desperation to discredit an historically documented flood in order to discredit the Bible is apparent.

Occam’s razor logic, AKA the KISS explanation for the prevalence of flood myths can be deduced as preserved knowledge by generations of priests dating back only about a few thousand years, well within a credible time frame even for oral history.

The multiple autonomous historical reports of a world-wide flood provide reliability for the enduring biblical account – “the extent to which a research instrument consistently has the same results if it is used in the same situation on repeated occasions.” In the case of the flood, the research instrument is the documentation of memories.

The undying legend of Atlantis is one source of information about the observable common roots of civilizations around the world, and corresponds to the biblical account of the pre-flood tyrannical era resulting in Noah’s flood. 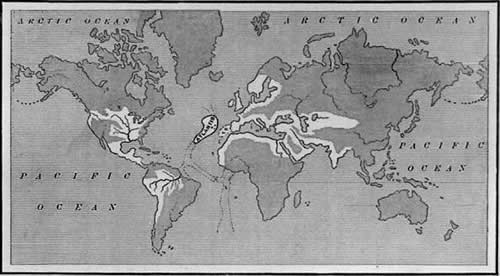 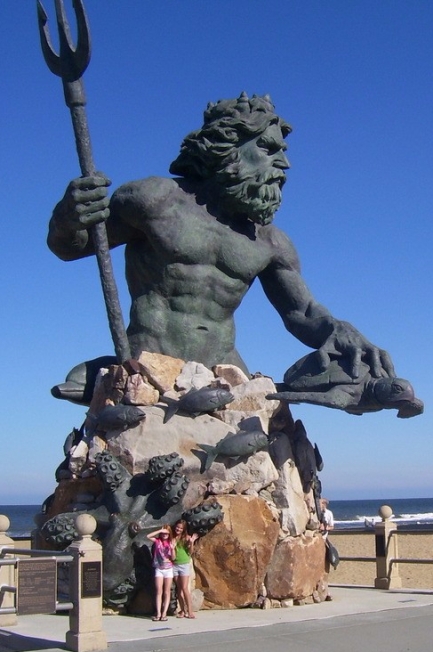 Atlantis is said to have been founded by the god of the sea, Poseidon (Greek) / Neptune (Latin) who had 10 sons born of a human woman. The kingdom and surrounding ocean were  named for his oldest son Atlas, who was the chief of ten kings.

“And I stood upon the sand of the sea, and saw a beast rise up out of the sea, having…ten horns, and upon his horns ten crowns…And the ten horns which thou sawest are ten kings…These have one mind, and shall give their power and strength unto the beast.” (Revelation 13:1, 17:12-13)

According to Plato’s account, written down in the 4th century BC from an oral account vouched to have been received from the Egyptians 200 years earlier, Atlantis was

a power that sprang forth from beyond the Pillars of Hercules [AKA Straits of Gibraltar, used as known existing reference point for Plato’s post-flood audience], from the Atlantic Ocean. For at that time this ocean was passable, since it had an island in it…and it provided passage to the other islands for people who travelled in those days. From those islands one could then travel to the entire continent on the other side [North and South America], which surrounds that real sea beyond [the Pacific]…Now on this Isle of Atlantis a great and marvellous royal power established itself, and ruled not the whole island, but many of the other islands and parts of the continent as well. What’s more, their rule extended even inside the strait, over Libya as far as Egypt, and over Europe as far as Tyrrhenia [central Italy]. Now one day this power gathered all of itself together, and set out to enslave all of the territory inside the strait, including your region [Greece] and ours [Egypt], in one fell swoop…

According to Plato, Atlantis’ exalted culture was destroyed when “excessively violent earthquakes and floods occurred, and after the onset of an unbearable day and a night, your entire warrior force sank below the earth all at once, and the Isle of Atlantis likewise sank below the sea and disappeared.”

Hindu mythology validates this account with extant records of the pre-flood civilization. These name Krishna as the head of 33 million gods. While undoubtedly not an accurate number it does match the biblical report of the existence of an extremely large number of angels.

The Vedas describe warfare among the gods to the extent of what seems to be the use of atomic weapons. Of particular note is the Kurukshetra War at Mahabhaata, AKA Dwarka, Krishna’s capital. Astronomical details given in the account allow us to date this sentinel event to about 3,000 B.C., a few hundred years before the flood. Enormous numbers of people, 25% of our current global population, are recorded as having been wiped out in just that one location.

We can more easily grasp the biblical account of world-wide destruction when we consider the changes in known history during the same length of time over the last 1,700 years between 500 AD and 2200 AD.

The outcome of Russian President Vladimir Putin’s invasion of Ukrainehas yet to be decided, but it’s possible the decision has set off a path to a full-scale global war…

“Nobody knows whether it may have already started…And we’ve seen this 80 years ago, when the Second World War had started … nobody would be able to predict when the full-scale war would start.”

He further emphasized that the outcome of this war puts the “whole civilization at stake.”

Where are the accounts of victories of the gods revered from most ancient historic times? On clay tablets and stelae, inaccessible to none but a rare antiquarian, whose interpretation can’t be trusted to remain consistent with future archeological discoveries.

The course of history itself validates the biblical account of the beginnings of human history.

“And God looked upon the earth, and, behold, it was corrupt; for all flesh had corrupted his way upon the earth…the earth is filled with violence through them…I, even I, do bring a flood of waters upon the earth, to destroy all flesh, wherein is the breath of life, from under heaven; and every thing that is in the earth shall die.” (Gen 6:12-17, 7:11-12)

“For owing to these three things came the flood upon the earth, namely, owing to the fornication wherein the Watchers against the law of their ordinances

“Neither be ye idolaters, as were some of them; as it is written, The people sat down to eat and drink, and rose up to play.” (I Corinthians 10:7)

The corruption from Noah’s day that was so vile as to demand utter destruction is defined for us NOT as angels raping human women, but mortal humans choosing to have sex with angels in order to access the hyper dimensional power of the angels.

“the men of Sodom were wicked and sinners before the LORD exceedingly…And the LORD said, Because the cry of Sodom and Gomorrah is great, and because their sin is very grievous…I will…שָׁחַת destroy it…And there came two angels to Sodom at even…the men of Sodom compassed the house round, both old and young, all the people from every quarter: And they called unto Lot, and said unto him, Where are the men which came in to thee this night? bring them out unto us, that we may know them…“Then the LORD rained upon Sodom and upon Gomorrah brimstone and fire from the LORD out of heaven…God שָׁחַת destroyed the cities of the plain.” (Genesis 18:20-21, 28, 19:1-5, 24-29) 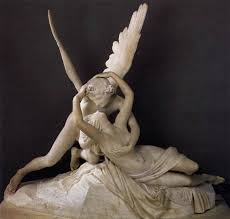 This passage on Sodom is quoted practically verbatim by Isaiah, and unquestionably clarified in the New Testament.

“And the angels which kept not their first estate, but left their own habitation, he hath reserved in everlasting chains under darkness unto the judgment of the great day. Even as Sodom and Gomorrha, and the cities about them in likemanner, giving themselves over to fornication, and going after strange flesh, are set forth for an example, suffering the vengeance of eternal fire.” (Jude 6-7)

Popular media has saturated society with the idea that this is a wonderful addition – to one’s own army of course. Some people, however, do realize the inherently unrealistic premise of powerful warriors selflessly serving the weak.

The Boys is set in a universe in which [genetically engineered] superpowered people are recognized as heroes by the general public and owned by a powerful corporation, Vought International, which ensures that they are aggressively marketed and monetized. Outside of their heroic personas, most are arrogant and corrupt..led by the egotistical and unstable Homelander.