Clarence Darrow, Scopes’ defense attorney, argued not so much for Scopes’ innocence as he did for an allegorical reading of the creation account and keeping the Bible in the field of theology, not history and science… the legacy of the trial… the rise of a field called “creation science.”

The field of creation science…began to emerge in its modern form with the 1961 publication of The Genesis Flood by John Whitcomb and Henry Morris…The introduction to the book opens with the words,

The question of the historicity and the character of the Genesis Flood is no mere academic issue of interest to a small handful of scientists and theologians. If a worldwide flood actually destroyed the entire antediluvian human population, as well as all land animals, except those preserved in a special Ark constructed by Noah…then its historical and scientific implications are tremendous.

As detailed in the posts Days of Thunder, geological evidence of world-wide sediment layers backs the biblical reports of world-wide floods, ice ages and massive upheavals resulting in the labels Days / eras of creation and Nights / eras of destruction.

The last flood-born sedimentary layers can be attributed to the historic record of the days of Noah.

“In the six hundredth year of Noah’s life, in the second month, the seventeenth day of the month, in the same day [very specifically stating this is not an era but a 24 hour day] were all the fountains of the great deep broken up…” (Genesis 7:11-12)

The damage that can be caused by flooding, fire and brimstone is catastrophic.

But even more than that, in its wake it left unmistakable scientific evidence validating the biblical record of the final judgment.

The findings have important implications for…affected areas worldwide, including Southeast Asia and the Pacific Rim. 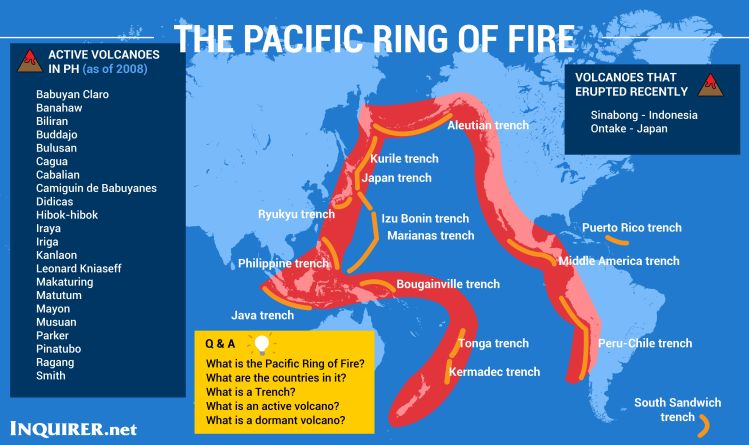 As previously noted, this world map is inaccurate, and in any case the continents weren’t yet separated at the time of Noah’s Flood. When we trace the Ring of Fire on a map of Pangea, we recognize the Ring encircles the outer edge of the land mass. The domino effect of one undersea volcano destabilizing and triggering neighboring volcanoes with their accompanying tsunamis corresponds to the biblical account of fountains of the great deep breaking up.

Archaeologists have found evidence of the largest known earthquake in human history — a terrifying magnitude-9.5 megaquake that caused a 5,000-mile-long (8,000 kilometers) tsunami and prompted human populations to abandon nearby coastlines for 1,000 years, a new study finds.

The earthquake struck about 3,800 years ago [consistent with the date of Noah’s Flood] in what is now northern Chile when a tectonic plate rupture lifted the region’s coastline. The subsequent tsunami…created waves as high as 66 feet (20 meters) and traveled all the way to New Zealand, where it hurled car-size boulders hundreds of miles inland, the researchers found.

Until now, the largest earthquake ever recorded was the 1960 Valdivia earthquake, which hit southern Chile with a magnitude between 9.4 and 9.6, killing up to 6,000 people and sending tsunamis barreling across the Pacific Ocean. The rupture that caused the Valdivia earthquake was enormous, extending as far as 500 miles (800 km) in length. But…the newly discovered ancient megaquake was even bigger, coming from a rupture roughly 620 miles (1,000 km) long.

Like the Valdivia earthquake, the ancient quake was a megathrust earthquake, the most powerful type of earthquake in the world. These earthquakes occur when one of Earth’s tectonic plates gets forced, or subducted, underneath another. The two plates eventually get locked into place by friction, but the forces that caused the plates to collide continue to build. Eventually, so much strain gathers that the point of contact between the plates rips apart, creating a gigantic rupture and releasing energy in the form of devastating seismic waves.

As detailed in the post Time: Catastrophism or Uniformitarianism, only catastrophic flood-waters can fossilize organic material into stone by:

As detailed in the post Dating: The Stones Cry Out, there is no accurate method of dating fossils, the sedimentary rock in which they are found, or the volcanic matter often found in close proximity.

it is only sensible to examine the credibility of the biblical account of this last flood documented in detail by historians of the time.

Calculation of the date of the flood based on literal interpretation of the old testament has been a scholarly activity for two millennia. The seventeenth century estimate of the Irish Bishop James Ussher has been accepted among many of the devout. The calculation is undertaken by adding the genealogies beginning in Genesis 11:10…

Bishop Ussher computed that the earth had been created in 4004 BC and that the flood occurred in 2350 BC which was henceforth accepted as the “traditional” biblical date…These traditional chronologies were acceptable among the learned until the foundations of religion were shaken by Darwin and…that ” high priest of uniformitarianism” Charles Lyell, who collectively contribute to the modern, predictable, comfortable, uniform, manageable version of the world that we know as science.

Actually, Bishop Ussher began with the genealogies in Genesis 5 with the lifespans of Adam onward. Which only makes sense. If this writer – from Stanford University, ranked #6 in U.S. colleges in 2022 – can’t get the basic database straight how can we trust anything else he reports?

Fact check everything, my friend.

In the following article recall that there is no scientific basis for the dates reported.

THE MOST VIOLENT VOLCANO ERUPTIONS IN HISTORY

The most violent eruption registered in history was that in the La Garita Caldera in the United States. It…formed a 35 x 75 km crater, drastically changing the climate on Earth…

The biggest supervolcano on Earth was discovered in 2013: the Tamu Massif, with a 4 km height and a 640 km width, a submarine shield volcano located in the Pacific Ocean, east of Japan…

Mount Etna…is still active and is the largest in Europe…It has been active over the past 2,000 years…Since 2018, eruptions have become more recurrent, in fact, the last one occurred on 21 September 2021 and the cloud reached 9 kilometres.Multiple witnesses provide validation of any legal, scientific, or psychosocial report.