A key method for tracking one single individual through name changes and a maze of mythic deceptions is through the many titles granted to him in recognition of his actions and inheritances.

For example, Caesar Augustus had many titles, all of which attributed aspects of divine power. All of them are also recognized as appropriated titles of The Promised Seed / Prophesied Savior / Christ. Bingo. Caesar, the first Roman emperor, and anyone taking this title as claim to be his heir, is Antichrist.

This divine king brought peace to the kingdom by means of military victory, and as an expression of submission to his rule he was worshipped as a god. Anyone who refused to worship him was a traitor, a rebel and disturber of the peace.

The prototype fire-breathing dragon is so important that he warrants an entire chapter in the Bible describing his powerful attributes.

“Canst thou draw out leviathan with an hook? or his tongue with a cord which thou lettest down? Canst thou put an hook into his nose? or bore his jaw through with a thorn? Will he make many supplications unto thee? will he speak soft words unto thee? Will he make a covenant with thee? wilt thou take him for a servant for ever? Wilt thou play with him as with a bird? or wilt thou bind him for thy maidens? Shall the companions make a banquet of him? shall they part him among the merchants? Canst thou fill his skin with barbed irons? or his head with fish spears? Lay thine hand upon him, remember the battle do no more…” (Job 41)

“Serpent” is also translated from another Hebrew word – seraph. We usually encounter the plural form “seraphim” where “im” ending serves the same pluralizing function in Hebrew as “s” in English. There is a clear connection between the two as the two Hebrew words are freely interchanged and translated into the same word serpent in the following passage.

“And the people spake against God, and against Moses…And the LORD sent fiery serpents / seraphim nachashim among the people, and they bit the people; and much people of Israel died. Therefore the people came to Moses, and said, We have sinned, for we have spoken against the LORD, and against thee; pray unto the LORD, that he take away the serpents from us. And Moses prayed for the people. And the LORD said unto Moses, Make thee a fiery-serpent / seraph, and set it upon a pole: and it shall come to pass, that every one that is bitten, when he looketh upon it, shall live. And Moses made a serpent / nachash of brass, and put it upon a pole, and it came to pass, that if a serpent / nachash had bitten any man, when he beheld the serpent / nachash of brass, he lived.” (Numbers 21:5-9)

“…the LORD thy God, which brought thee forth out of the land of Egypt, from the house of bondage; Who led thee through that great and terrible wilderness, wherein were fiery-serpents / seraphim…(Deuteronomy 8:14-15)

The verb form  means “burning”.  The adjective “fiery” can mean “brilliantly shining” as captured in the image of polished brass.  In another sense this characterizes the power that these beings have over life and death with the use of fire, as with cauterizing a festering wound or inflicting a toxin-induced burning pain or microorganism-induced fever or utter destruction.

“In the year that king Uzziah died I saw also the LORD sitting upon a throne, high and lifted up, and his train filled the temple. Above it stood the seraphims:”

Put this in historical context to understand it. Uzziah / AKA Azariah was a godly, therefore empowered, king of Judah during an era of world war equal if not greater than World War II. The Assyrians, the prototype evil pagan Nazis, were sweeping through the civilized world like an F5 tornado. Judah’s allies were falling to the left and right and little Judah was next. Transfer of government during a crisis is always dicey. Naturally Isaiah was sweating bullets.

This is why, after attending King Uzziah’s funeral and multiple ministerial meetings on economic downturns and internal unrest and international war reports he reports that he saw “also” the High King, lord of hyper dimensional armies. Remember who is in charge here!

“Then said I, Woe is me! for I am undone; because I am a man of unclean lips, and I dwell in the midst of a people of unclean lips: for mine eyes have seen the King, the Lord of hosts.Then flew one of the seraphims unto me, having a live coal in his hand, which he had taken with the tongs from off the altar: And he laid it upon my mouth, and said, Lo, this hath touched thy lips; and thine iniquity is taken away, and thy sin [of faithlessness] purged.” (Isaiah 6:1-6)

“Then thou spakest in vision to thy holy one, and saidst,

Images of ancient Mesopotamian gods bear a striking resemblance to the biblical description of the seraphim, This would be because they were among the fallen angels, including Lucifer.

He is also called a cherub.

“Thus saith the LORD God…Thou art the anointed cherub that covereth; and I have set thee so…I will cast thee as profane out of the mountain of God…thou hast corrupted thy wisdom by reason of thy brightness…” (Ezekiel 28:12-17)

The designations of “anointed” and “set” inform us that cherub is a position, not a species. We logically conclude, then, that the looks of cherubim or seraphim described in the Bible are not necessarily intrinsic to all beings in that class, specifically to our study, to Lucifer.

However, Lucifer’s appearance as nachash is so consistent as to give us a means of identification.

“Mysteriously,” virtually identical worship of the serpent in his own form is found in ancient cultures around the world. 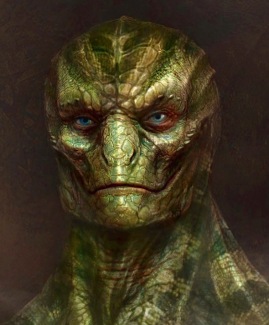 The reality of  a hyper-dimensional reptilian being that has been involved with humanity from the beginning of history is supported by the fact that he continues to be worshipped in our own culture in new age religions as:

…Serpent Seraph, Winged Serpent, Dragon, Nachash…alter-Form of HERU’s Second Person. He is the Creator and Maintainer of all worlds and beings. He is the Lord of all time [therefore death, you must realize, Beelzebub], WHO ALONE REMAINS (SESHA) AFTER THE ANNIHILATION OF ANY MATERIAL UNIVERSE! [Emphases in the original.]

You realize this means war.

This boast is absolutely consistent with the predictions in the Hebrew Scriptures.

The Mesopotamian anthropomorphized version of the Adversary, Enki, was portrayed with “rivers of fresh water flowing from his shoulders”, or more probably, standing between the key rivers Euphrates and Tigris. However it is interpreted, this water represents his claimed aspect of life-giver.

Note also how he stands with one foot on the sea (waves) and one on earth – the stance of victory.

And what is that mystery?

Once we accept that there are powerful hyper dimensional beings in a War of the Worlds, we have to decide which side to be on.

“For, behold, the day cometh, that shall burn as an oven;

When you put it that way, the choice seems obvious, doesn’t it?

“…when ye knew not God, ye did service unto them which by nature [i.e. have no intrinsic power, only limited power given them by the true God] are no gods…” (Galatians 4:8)

“...I command thee this day to love / be one with the LORD thy God, to walk in his ways, and to keep his commandments and his statutes and his judgments, that thou mayest live and multiply: and the LORD thy God shall bless thee in the land whither thou goest to possess it. But if thine heart turn away…and worship other gods, and serve them; I denounce unto you this day, that ye shall surely perish [because those gods will deceive you and lead you into a trap to steal your energy / power / life]” (Deuteronomy 30:16-18)