The…exact altitude where space begins is something scientists have been debating since before we even sent the first spacecraft into orbit.

The true outer edge to the Earth’s atmosphere, or a reasonable candidate for it, is the magnetic shock front with the solar wind.

Different definitions place the top of the exosphere – earth’s topmost layer of atmosphere – somewhere between 62,000 miles and 120,000 miles above the surface of Earth. The Kármán line is a generally accepted defined beginning of space, some 62 miles (100 kilometers) above Earth’s surface.

Sixty miles up in’t at all what I envision whenever I hear the news of “outer space”.  That’s still well within Earth’s atmosphere.

So of all the different definitions of where outer space begins, why 62 miles?

The Kármán line is an arbitrary definition based on some technical considerations. Mainly, it is the height at which the atmosphere becomes so thin that an air-craft can no longer fly – there isn’t enough air under its wings to generate lift.

In 1944 a German V2 rocket reached the greatest height of rockets developed so far – 100 kilometers.

In 1957 the Soviet Union launched the world’s first artificial satellite, orbiting Earth at a height ranging from 200 km to 950 km atop a modified Soviet intercontinental ballistic missile (ICBM). Sputnik launched the start of the space age and the U.S.-U.S.S.R space race with new political, military, technological, and scientific developments.

In 1958 the U.S. established NASA, stating that America’s space program was strictly civilian.

Seriously? In response to the Soviet Union propelling an ICBM around the world demonstrating they could nuke the U.S. and any of its allies? This is simply incredible.

In 1959 the U.S. launched the X-15, a small rocket-powered aircraft. For flight in the dense air of the usable atmosphere, the X-15 utilized conventional aerodynamic controls. For flight outside of the appreciable Earth’s atmosphere, the X-15 used hydrogen peroxide rockets which provided thrust for 80 to 120 seconds of flight. The remainder of the normal 10-11 minute flight was powerless and ended with a 200 mile-per-hour glide landing. 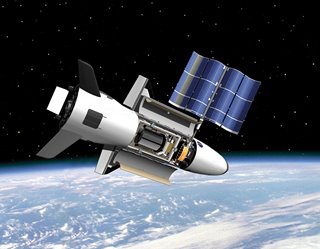 Saturn V was an American human-rated super heavy-lift launch vehicle used by NASA between 1967 and 1973.

A three-stage, liquid-fueled rocket, te Saturn V was developed under the Apollo program for human exploration of the Moon and was later used to launch Skylab, the first American space station [positioned only 250 miles above earth].

As of 2022, the Saturn V remains the only launch vehicle to carry humans beyond low Earth orbit [defined as 1,200 miles above earth], as well as the tallest, heaviest, and most powerful (highest total impulse) rocket ever brought to operational status…

I encourage you to listen to NASA’s own public service announcement, launched in 2014, on Apollo’s replacement, the Orion spacecraft.